Inspired by true events, The Revenant is a survival epic set during the 1820s in the American West. Leonardo DiCaprio plays Hugh Glass – a frontiersman and fur trapper – who is mauled to the brink of death by a grizzly bear and ultimately abandoned by his companions. Glass endures unimaginable pain and grief, but refuses to succumb to his injuries, with a desire for vengeance driving him from death.

The Revenant is a story of the unrelenting human spirit and – in the directors own words – the hollowness of vengeance. It’s a brooding piece, with DiCaprio giving a stunningly psychical and quietly emotional performance. Glass is a reserved character – with his past revealed in dream-like sequences interspersed throughout the film – but is driven by absolute love for his family. The character doesn’t have many lines – partly due to his throat being torn by a bear – but his expressions and the absence of dialogue are just as powerful as any monologue.

The cinematography is nothing short of stunning, with the Canadian and Argentinian locations starkly beautiful, but also haunting and at times hypnotic. Cinematographer Emmanuel Lubezki wanted to shoot only in natural light to maximize the realism and has wholly succeed; creating a gritty and honest visual flare. The film is at times very gruesome, but rather than contrast with the beauty of the locations, it lends to the films physicality. 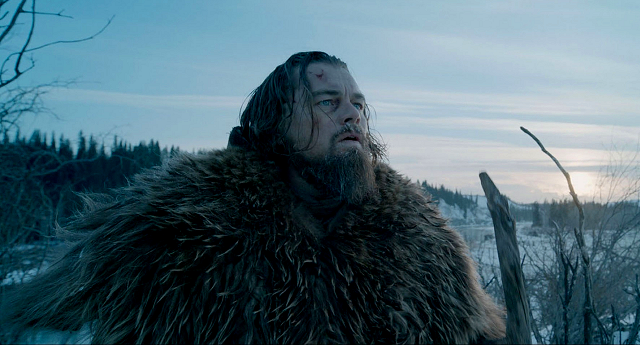 One of many things I loved about The Revenant was its refusal to cut away. Emmanuel Lubezki and director Alejandro González Iñárritu have put together some absolutely engrossing and visually impressive imagery, with the bear mauling of particular note. Throughout the film, there are many tracking shots and a number of lengthy single-shot scenes, which further add to the films authentic aesthetic. It’s no holds barred – no frustrating cuts and some wonderful scene composition, depicting not only the grandeur, but also the ugliness of nature.

The plot in The Revenant isn’t particularly complex in the same way that the plot in Brooklyn isn’t particularly complex, but both succeed through the performances of the cast, which add real weight and emotion to an otherwise straightforward story. Furthermore, The Revenant is shot in such a meditative way that the story becomes something more; the film and its brooding, honest quality sticks with you post-viewing. Arguably, the films style outweighs its substance, but it is nevertheless an engrossing and epic tale, and in the almost three hour runtime, I didn’t think of it as overly long nor tiresome.

When DiCaprio isn’t on screen, Tom Hardy steals the show as fellow trapper John Fitzgerald. Hardy’s character is gritty, blunt and compellingly cunning; opposite to DiCaprio’s character, he’s outspoken and deceptive. The character is behind a number of the films edge-of-your-seat moments, during which I found myself eyes wide and mouth agape.

Between these two trappers are a number of other mountain men, varying indigenous tribes and a group of French traders, but they are mere sub-plots and at many times simply an avenue to hammer home some gritty messages. The Revenant is set during a troubled time and the setting and much of the imagery is haunting, but the film is very much focused on DiCaprio’s character; it is ultimately his story, but I do wish many of the other characters weren’t as one-note, which may have lent to a more multi-layered plot.

The music is outstanding. Ryuichi Sakamoto is a masterful musician and his score – in collaboration with Bryce Dessner and Alva Noto – is atmospheric and evocative. The film lacks any sort of memorable melody or theme, but includes a number of multi-layered pieces that evoke the beauty and the harshness of both mother nature and human nature. The score is cold – like the setting – and has a very unique, distinct tone.

The Revenant is an extremely impressive film – one of those ones which becomes more of an experience. It’s visually stunning and powerfully performed; it’s a film of magnificent scope and grandeur, but at the same time feels very personal. It’s beautifully poignant and one of my favourites of recent times.