Death Note and Bakuman authors Takeshi Obata and Tsugumi Ohba started their new series back in November, 2015. The manga – titled Platinum End and published monthly in Shueisha’s Jump Square magazine – introduces us to Mirai; a dejected youth who attempts suicide in the opening pages. Moments before his death, Mirai is saved by an angel named Nasse, who wants to give him the hope to live. She grants him an assortment of angelic powers – wings that allow the user to fly at unbelievable speed and an unlimited supply of two different arrows, a red one which causes whomever is shot to fall in love with the user and obey their every command and a white one used to instantly kill the target – and informs him that he’s one of the thirteen candidates to become the next God, who is stepping down in 999 days.

As a massive fan of both Death Note and Bakuman, I was ecstatic when I heard the news of a new series from Ohba and Obata. To date, four chapters of Platinum End have been released and I wanted to write a sort of ‘first impressions’ on the manga. 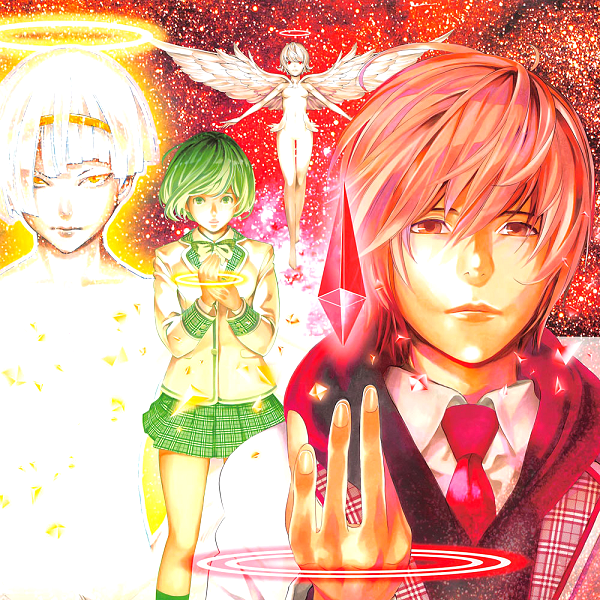 First and foremost, Takeshi Obata’s artwork is – unsurprisingly – brilliant. His distinctive style is ever-present, with an abundance of well-drawn action and compelling designs for the angels. My only complaint is that Obata’s character designs can grow a tad repetitive, with many characters sporting eerily similar looks to characters in his previous work.

As usual, Ohba handles the plot, which I think has been a little hit or miss thus far. I have no doubt a lot of planning went into the story, but the execution is somewhat haphazard. The opening chapter felt a little overwhelming in terms of content and would have perhaps benefitted from a slightly slower pace. The subsequent chapters have a less erratic flow, but there are a couple of things that don’t quite add up.

For example, any of the God candidates that have a ‘Special Rank’ angel are given both the wings and the arrows, so why did Nasse even bother asking Mirai to pick between them? Tradition, apparently. Surely there are better ways to cover exposition. 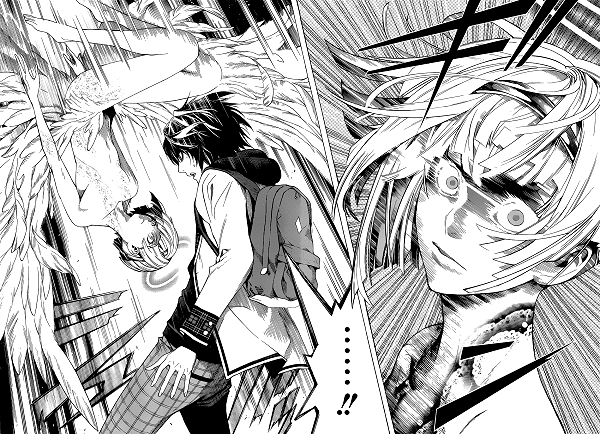 I was also perplexed at the reason all of the candidates are Japanese. Seemingly, one of the prerequisites to be chosen is that you must have attempted suicide, so what better place – apparently – than Japan. Nasse literally says all of the candidates are in Japan because it’s where a lot of people commit suicide. While the country is notorious for places like Aokigahara, its suicide rate is actually outside of the top fifteen. Even if the country did have the highest suicide rate, it wouldn’t be more than every other country combined. It doesn’t make sense for all of the God candidates to be Japanese, but given that it’s a manga and it’s almost expected to be set in Japan, I wish Ohba wouldn’t have even bothered with an explanation.

For these lapses, though, there are slight allusions to the Ohba we know and love. Once all of the exposition has been laid out, it’s clear to see the potential for the death game and/or cat-and-mouse plots that made Death Note so riveting – especially given that the God candidates can essentially kill each other off in order to be chosen – and the characters thus far have been interesting. Ohba is usually fairly good with characterisation and I’m anticipating some very memorable God candidates and a lot of cunning dialogue to come.

The first couple of chapters have been a little uneven and I was disappointed by some contrived exposition, but there are a couple of sequences that have stood out (much thanks to the wonderful art of Takeshi Obata), so I’m hoping Platinum End will settle into something quite amazing once it finds its feet and Ohba is able to delve further into the plot. It’s also slightly comparable to Death Note thus far and is – in ways – an opposite version, but I’m hoping it becomes something more distinctive along the way.