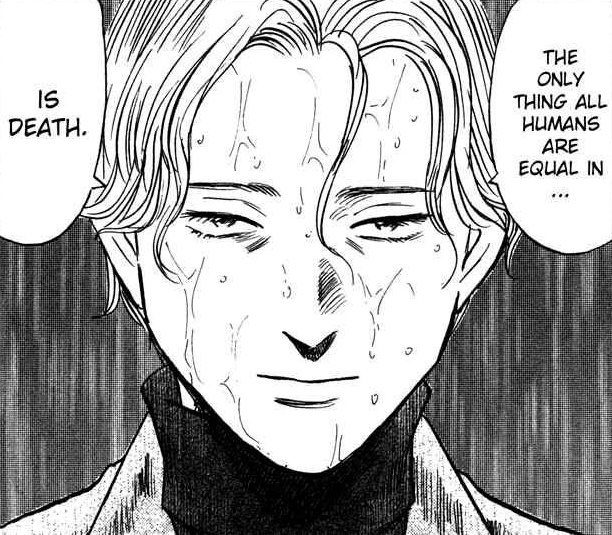 The story goes that Naoki Urasawa toyed with penning a manga set in the medical field early in his career, but met resistance from his editor. Now, almost two decades since Monster concluded, it’s clear to see it was not only – against his editor’s predictions – a landmark work for Urasawa in terms of popularity, but also served as the first manga in a formula that has since become the author’s forte.

Monster is the case of Kenzo Tenma, a brain surgeon whose child patient disappears amongst suspicious circumstances, only to resurface years later as an enigmatic serial killer who frames Tenma. The doctor turned vigilante detective must evade the police while tracking the real killer, which takes him across Europe, where he uncovers a thread of decades old villainy dating back to the Cold War.

It’s a sweeping narrative with a structure that is consistent in arguably all of Urasawa’s major serial work since. His winning plot formula spans decades, locations, perspectives, and generations, is based partly in history, is loaded with conspiracies and clever misdirection, and boasts an enormous supporting cast, with central characters which often trade places.

The extent of Urasawa’s research and planning is clear. For a story with so many threads, it seldom loses its way. His artwork effortlessly guides the reader through involved set pieces, which often unfold from several angles. His style is cinematic, communicating movement and cuts through expert panel arrangement and combined action-reaction shots.

American TV show The Fugitive was purportedly a strong influence on Monster, and I would argue not only in concept and tone. The author’s pace and artwork embody the fluency and rhythm of continuity editing – it’s easy to imagine Urasawa’s characters and settings in motion, with the author illustrating location with an astute sense of depth. The artwork itself isn’t as intricate as something you might see from the author’s contemporaries, such as Jiro Taniguchi or Nobuyuki Fukumoto – in fact, there are very few page spreads, let alone double spreads – but its finest qualities lie in its seamless ability to capture and enrapture the reader into another world.

This expert blend is what makes an Urasawa story so enjoyable to follow, yet for all the painstaking planning and brilliant drama, there are aspects which are a little coarse. The story itself is a complex blend of multi-narrative drama that is thrilling and expertly woven, but for a story of such impressive scope, the conclusion feels somewhat abrupt. Though, among Urasawa’s most renowned work, Monster is certainly not the worst offender in this regard.

The exposition is at times heavy-handed and too direct – perhaps a symptom of the author’s extensive groundwork – sometimes he’s too keen to chaperone readers. There are many panels where the artwork alone would have left a stronger impression than the accompanying dialogue, especially given Urasawa is excellent at drawing expression and reaction.

Urasawa’s characterisation ranges from noteworthy to lacking. Come the end, many of the supporting characters feel distinguished and important to the wider plot, and the author builds well to exciting character meetings and confrontations, but some are too narrowly bound by their framework. Central character Tenma is a good hero that you enjoy rooting for, but you know – contrary to his monologue – he’s never really going to kill the antagonist, or anyone for that matter. Urasawa’s protagonists have this unwavering moral compass that saps a lot of tension from key scenes.

On the opposite side of the spectrum, the ambiguity surrounding the antagonist Johan is gripping, and Urasawa plays well with subversion, knowing exactly when and how to tease key details, but his dialogue and spectre-like appearances become monotonous, with eventual revelations that are only half as fulfilling as the journey there. To this day, the character has a certain prestige among manga villains, but I think Urasawa has done better since with Tomodachi and The Bat in his subsequent works.

For a seinen manga, I would expect characters a little less straight-edged, though, as a counter point – even somewhat archetypal – Monster’s supporting characters are rarely tedious or uniform. Furthermore, that the author can swap out the central character for what would have been months at the time of its serialisation, and yet maintain the same level of tempo in the plot and intrigue from readers is very commendable.

There is an undeniable well-roundedness to Monster. The lesser parts in no way detract from the author’s expert storytelling, which has only gotten bolder since. Urasawa’s preferred thematic structure, with his impressive mixture of location and character, shape his work with a certain global and effective quality that is uniquely his own. Monster, while not as spectacular as 20th Century Boys, or as playful as Billy Bat, or as concise as Pluto, nonetheless presents its own allure as the definitive work among Urasawa’s mystery fiction, skilfully comprising all that makes his manga so compelling.