I must confess, I am not the biggest fan of Quentin Tarantino. I enjoyed Pulp Fiction and Reservoir Dogs, but I could never get into Kill Bill and the other half of his filmography has never mustered much enthusiasm from me. Though, with that said, I found The Hateful Eight quite interesting.

Essentially, it’s a story of a bounty hunter on his way to deliver a prisoner and collect his bounty, but – you guessed it – something gets in his way and drama ensues. What I found intriguing, though, is that along the way it develops into a whodunnit and becomes almost theatrical.

Half way through, Tarantino starts talking…

“About fifteen minutes has passed since we last left our characters”, he says.

I wasn’t quite sure what to make of this off-beat narration at first, other than to think it totally broke the immersion, but then I got it. The film is essentially a cinematic version of a stage play.

The film is comprised of six different ‘chapters’ very reminiscent of acts in a stage play, we have an all-knowing narrator offering important exposition, almost all of the film is set in one location, comparable to a theater set and the story is extremely dialogue-driven.

It’s unconventional, certainly, but it really worked and I’ll be shocked if Tarantino isn’t up for Best Original Screenplay. 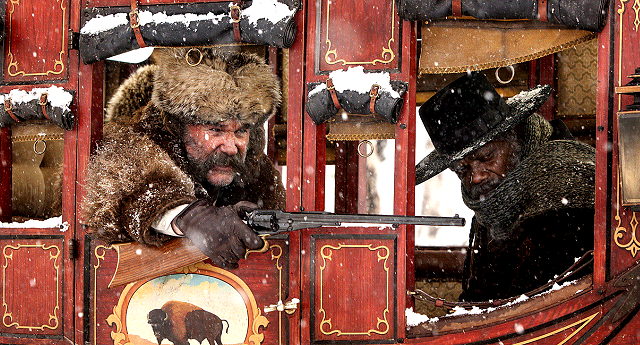 I’ve studied theater and playwriting quite extensively at university and was very indifferent towards it at first, wishing I had more film classes instead, but before long I found my footing and was later surprised by how my knowledge of playwriting aided my screenwriting. With a play, you just don’t have the freedom a film has (particularly in editing). You can’t whisk in and out of scenes, the set may only change a dozen or so times and it’s difficult to show minute details, so you can’t rely on show-don’t-tell storytelling. As a result, you have to write some really great dialogue to keep the story rolling and your audience interested.

I feel that dialogue is one of Tarantino’s strengths and presenting the story in such a theatrical way with a limited set really allows his writing to excel. There is a lot of talking in The Hateful Eight, so don’t go in expecting an action romp, but the film doesn’t dull. It’s at times extremely tense, at others very emotional and surprisingly, also quite funny. Tarantino hasn’t missed a beat and I enjoyed the writing so much that I feel I should now go back and reassess some of his films I couldn’t get into on first viewing.

The cast are wonderful, fluently delivering the compelling dialogue. Samuel L. Jackson plays an intriguing bounty hunter named Marquis Warren and is – not surprisingly – a highlight, but I also really enjoyed Kurt Russell, Jennifer Jason Leigh and Walton Goggins as John Ruth, Daisy Domergue and Chris Mannix respectively. Michael Madsen’s Joe Gage is the only character I feel was somewhat underutilised, but he nevertheless played a fine something’s-up-with-this-guy character. The exchanges between Samuel L. Jackson, Kurt Russell and Walton Goggins were some of my favourite moments, along with the “Close the door!” gag.

Despite being shot on 70mm, the film doesn’t boast copious amounts of scenery or panoramics, as it’s largely set inside a cabin named ‘Minnie’s Haberdashery’, which the audience get a wonderful feel for. The cinematography is generally great and the lighting superb, though there is some heavy-handed imagery. Of course, the Tarantino blood and violence is also present. I have seen some label it as his self-indulgence rather than self-expression at this point and while things do get a little crazy during the final act, given the nature of the characters and their professions, I feel the violence is well warranted.

Ennio Morricone once again collaborated with Tarantino on the score. Sometimes I find the music somewhat distracting in Tarantino’s films, but this wasn’t the case in The Hateful Eight. The score was predominantly on-point, though nothing stood out to me as particularly stunning. Morricone was apparently pressed for time whilst creating the score and even used some left-over tracks from when he worked on The Thing. Music is always so very subjective, but while I feel it was used well in The Hateful Eight, I also feel it could have been much more.

All in all, I enjoyed The Hateful Eight. Tarantino’s writing is ever-impressive and I’m glad he’s tried something new with the theatrical presentation. The music hasn’t bowled me over, though die-hard Tarantino fans will probably love it and despite the film operating very much like a stage play, Tarantino’s style isn’t lost along the way and it certainly feels like a Tarantino film. I don’t think it will go down as his best film, but it is certainly one of the better ones and definitely worth your time.

One thought on “Movie Review: The Hateful Eight”