I saw Warcraft earlier on and wanted to offer some quick thoughts. I feel obliged to say I’ve never played the Warcraft strategy game series, but my girlfriend has played World of Warcraft for years (and I had a draenei mage at one point), so I am familiar with bits and pieces of the world and the lore.

There will be spoilers below.

First and foremost – as a fan of high fantasy – Warcraft delivers. The world of Azeroth is – thus far – stunning. Stormwind has translated beautifully to the screen and the small glimpses of Dalaran left me eager for more. The Orcs are superbly rendered and appear very life-like and authentic next to their human counterparts, as do the dire wolf and gryphon mounts.

The Fel – depicted as a magical green mist – looks a little typical for the genre, but the visuals honor the source well and the magical elements – spells, conjurations and teleportations – were all visually impressive and felt wholly genuine.

The films world building was one of its strongest aspects and is absolutely key if Warcraft is to become a film franchise. The first installment is a strong one, but it does falter somewhat in the development of its cast and ultimately, I feel the film could have benefited from some more exposition.

Medivh was a character that felt extremely important yet underutulised. He was essential to the plot, but there were only a couple of hints before the Guardian had succumbed entirely to the Fel. I wish more time was spent showing his corruption and descent into mindlessness. Of all the characters, I felt he should have had a larger role.

I also wish Lothar was given proper time to grieve after losing his son, rather than being spurred into action, and that more time was spent on Durotan’s demise. Durotan was perhaps one of the most appealing and agreeable characters, but his death wasn’t lingered upon a great deal.

I didn’t have any major gripes with the story, but a little extra development and some more exposition would have helped with cohesion and solidified a stronger flow and pace. However, I know that Duncan Jones had to cut just under forty minutes from the film, so here’s hoping an extended version is released at some point in the future that rectifies or at least improves upon any developmental or pacing issues.

I had no problems with the acting (although the human characters were certainly overshadowed by the orcs) and thought the orc cast did a phenomenal job of humanising big green monsters. Furthermore, though the supporting cast need some more time and focus to grow, they mostly all left an impression, which is more than I can say for another recent blockbuster (X-Men: Apocalypse). I also loved the little bits of fan service. Getting glimpses of dwarves, draenei and high elves was brilliant and if the franchise takes off, I can’t wait to eventually see taurens. 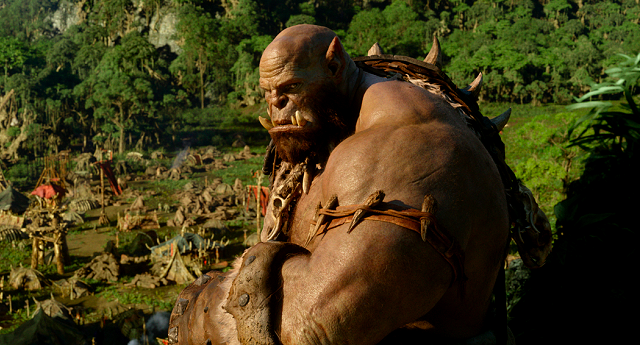 As for the music; Ramin Djawadi is clearly a talented composer and I love his work on Game of Thrones, but it was all rather satisfactory in Warcraft. I couldn’t tell you if Durotan had a theme or if Stormwind had a particular leitmotif. It certainly wasn’t bad – the music is suitably uplifting during passionate dialogues and fittingly dramatic during moments of tension – but it wasn’t entirely memorable or dissimilar to what you may expect. I love the music in World of Warcraft (particularly in Dalaran) and hope the film series is able to develop its own, unique score throughout the sequels.

Lastly, the action was exciting, but the climatic battle was a little by the numbers. I enjoyed the first human vs. orc confrontation in the forest and the Mak’gora between Durotan and Gul’dan the most. The orcs movements and attacks – both with their fists and their humongous weaponry – genuinely felt like they had tremendous force and authenticity behind them.

All in all, Warcraft isn’t a perfect film, but it’s a wonderful start to a franchise that has magnificent potential. It was engaging from title to credits and ended on a great note. I adore the world and with a little polishing and some further melding, the characters will become deeper and all the more engaging. I really hope a sequel is possible and that it isn’t another ten years from announcement to release.