Guyver is a classic — the manga began early in 1985 and is still published to this day. Written and illustrated by Yoshiki Takaya, it follows a high school student named Fukamachi Sho, who stumbles upon a strange device that envelopes him, and subsequently allows him to transform into the Guyver, which is a sort of bio-engineered alien bodysuit. Sho and his friends then find themselves pursued by a mysterious organisation with an otherworldly origin named Chronos, who want to reclaim the Guyver unit.

The manga was promptly adapted to anime in 1986. The fifty-five minute original video animation was titled ‘Guyver: Out of Control’ and made its way to Western audiences in the early 1990s. For many, it was among their initial exposure to anime. This was followed by two more adaptations: a twelve episode series in 1998, and a twenty-six episode series in 2005, which covered the first four and ten manga volumes respectively. It was even adapted to film in 1991 and starred none other than Mark Hamill. Apparently it had some degree of success, as there was a sequel in 1994, although without Hamill.

I must credit the 2005 adaptation as my introduction to the series. It remains the newest interpretation of Guyver, and has certainly aged the best. It was part of the ADV line-up, with the company also helping to produce. I love this anime for two reasons in particular: its accuracy in adapting the manga, and its ending. It did not cut corners, or attempt to alter the plot, and was not afraid to end on a rather perilous note. It serves as a terrific platform to launch viewers into the manga, which utilises the long form of the medium to stage some spectacular revelations and surprises, which I have seldom seen in a series that seemed to begin as an analogue shounen.

The reason I’m writing about Guyver today is because I was recently on the hunt for an anime where either the villain is the primary character, or one in which the antagonists win. To my surprise, there really isn’t that many, or at least many good ones. On the other hand, there are a wealth of manga series with a significant focus on the antagonists. Guyver is one of these, and the 2005 adaptation actually ends with the villains winning.

In episode twenty-three the heroes are easily defeated, and in episode twenty-four the evil organisation Chronos takes over the world. The swiftness of this transition really struck me. The takeover is portrayed in montage in both the anime and the manga, with multiple world leaders simultaneously revealing themselves to be Zoanoids (a sort of super powered monster of which Chronos is comprised) on what would become known as X-Day. They are battled, shot at, and even nuked, but all to no avail. Then we cut to a year later, and the entire planet is under Chronos’ dominance.

Our hero Sho is nowhere to be seen. In fact, he was freshly vaporised by one of the founders of Chronos, who was literally created by alien-like Gods who spurred the onset of human evolution. What else had beset our hero before then? Well, besides his life being ruined simply by being in the wrong place at the wrong time, he was knocked unconscious while in the Guyver suit by one of the villains. The suit subsequently went into ‘autopilot’ and ended up killing Sho’s own father (with Sho still inside), who had been unwittingly transformed into a Zoanoid. At this point, the manga was still published in Tokuma Shoten’s Shounen Captain magazine, with Guyver being a mainstay from the magazine’s inception until its dissolution. The magazine was home to other gritty manga like Trigun and Grey.

I feel like Guyver is a bit of an outlier these days. Sure, there are manga with similar concepts — such as Zetman and Ultraman — but I feel as though none quite match the level of depth and engagement present in Guyver. A lot of it sounds very strange and rather far-fetched, but it is deceptively layered and wonderfully organic. The story ultimately spans hundreds of millennia, with a gripping and sinuous mythology, and although some of the characters are terrifically funky-looking, they all have personality, or at least a sense of plausibility and depth. Many of them are flawed; they make controversial decisions, and are rash and swayed by personal interest, which lends them a degree of authenticity.

Characters switch sides — villains become anti-heroes and protagonists are turned against their comrades. It’s not so black and white, or good versus evil. Sho is betrayed multiple times by Makishima, one of his very limited number of Guyver allies, who ends up establishing his own questionably wicked faction. He even takes advantage of his childhood friend who obeys his every command, and eventually snatches away her livelihood altogether by transforming her into a Zoalord (which is essentially an all-powerful Zoanoid) condemned to live a tragically short life. 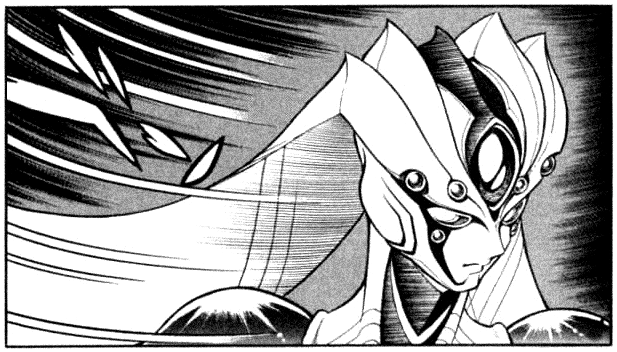 I feel it’s a testament to the manga’s depth and intrigue that it began publishing in 1985 and is still going more than thirty years later, albeit the updates are few and far between.  Nonetheless, it does feel like a remnant of an older time. There are no harems or flashy protagonists in Guyver, nor does the hero try to balance his super powers with an ordinary school life. It’s amusingly contrasted with almost every manga serialised within Monthly Shounen Ace magazine, which is currently home to Guyver.

The pages are dominated by cutesy female characters as seen in the likes of Kemono Friends and Gamers, which the covers then paint as almost gaudy and super contemporary. You could scarcely guess it is the type of magazine in which Guyver would reside. Nonetheless, there it remains, holding on after thirty-one volumes. The manga sadly has almost no presence in the West, and has itself been absent in Japan due to a hiatus, but to me, the day Guyver comes to a close will be one of the most momentous days in the history of manga — one of the true greats of an older time will have concluded, leaving behind a terrific legacy and a tragic void. I feel it’s one of the heavyweight ‘superpower’ series, and I wonder if the Marvel obsessed masses of today would afford it a new audience.